skip to main | skip to sidebar

The Keg at Baker Lake 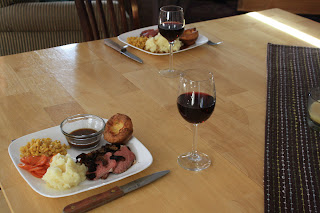 Well, not really the Keg , as such. But as close as we'll get before coming south at Christmas.
We tried to replicate a favourite meal from the Keg: Prime Rib au Jus, with a couple of exceptions.... Yorkshire pudding instead of bread, no garlic for the mashed potatoes, and the au jus could use some more pizazz. But for a very first prime rib attempt, neither of us could complain.
We have to thank the good people at Calm Air for making sure our groceries got in at all, but next time, maybe a bit earlier than 11:30pm?
Posted by he and she at 8:43 PM 3 comments:

I don’t know if the weather is taking its cue from the school calendar, but it sure seems like fall here lately. The kids went back to school on Monday, and we’ve had cool, wet, damp weather ever since. The sun might’ve come out for 20 minutes all week… and we’ve had to turn the furnace on!

Taking advantage of the fall mood, I decided to step up my baking to the next level. (I’ve been baking *a lot* since moving north, maybe because sweets are so expensive up here.) I decided to bake a whole bunch and cart everything down to a local ‘Flea Market’, and see if I couldn’t make some fun money.

I whipped up some cupcakes (chocolate icing was much more popular than vanilla!), butter and coconut tarts (Grandma Rose - yours are still better!), brownies and m&m cookies. And then I packaged some together, made pretty labels, and pulled my tablecloth out of the cupboard.

Everything went over really well. The brownies were the hottest seller, followed by the cupcakes with chocolate icing. I came home without any m&m cookies, after giving what was left to my friend who was nice enough to come down and hang out with me. All the packages of coconut tarts were gone, but I still got to bring some individual ones home. And most of the individual butter tarts were gobbled up, but I had two packages left over (‘he’ says ‘wooohoo!’). 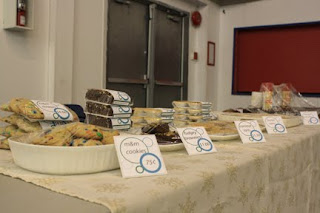 Food, in general, rules at the Flea Market; there were buns, casseroles, salads, and pizza and caribou stew and popcorn, jello, and more! And what did my efforts get me? About $100 in profits. Turns out, sweets at the Flea Market were just the ticket!
Posted by he and she at 9:05 PM 2 comments:

While suffering through bug season, we’ve found a couple of new ways to keep from being bored. (By the way, the bug hood is on its way… so shortly we’ll be able to get back out there and enjoy the warmer weather without worrying about the blackfly welts! How do the little buggers tell the difference between leg skin and face skin??)

For a birthday present, ‘he’ got Heroes Season One on dvd. We’ve been diligently watching an episode a night, torn between wanting the disks to last and needing to find out what happens. I don’t know if I’m developing a special ability… but I see us purchasing more seasons in the near future.

About a month ago, we decided to blow the remainder of our Chapters Christmas gift cards. $200 dollars later, we were anxiously waiting for the books to get here, and hoping we had some gems in the bunch. I had finally given in and decided to try ‘Eat Pray Love’ (which is now a movie starring Julia Roberts). I *LOVE* it – I’m not quite done, I still have the ‘Indonesia’ section to read – but I think if the movie is half as good as the book, it’ll be great! Oh, and I’m totally jealous of everyone in the south (and if anyone in Iqaluit is reading this) who get to go see the movie while I’ll have to wait for the dvd.

And since we were enjoying new toys, we decided that Squire shouldn’t be left out! We gave her the last ‘moo’ friend – Mr. Moo Pony. I don’t exactly know how my dog got a pony before me! But since hers is green and goes ‘squeak’ instead of being bay (or gray) saying ‘neigh’, I think I’ll just let her keep it and keep holding out for something better.
Posted by he and she at 7:08 PM 1 comment:

We’ve rediscovered a few ‘lost’ treasures from winter in Baker.

One has happened pretty slowly. It’d been commented on a few times in passing, but now I’d officially say we have ‘night’ back. It’s not as dark at any point as it was in the winter, but after months of remarking on the lack of darkness, we’re now remarking on how dark it is.

The other blew in suddenly last night. We have some freakishly strong winds today in Baker. It reminds me of blizzard days from winter when we had to turn the TV up to hear it over the wind. Deciding to take advantage of the bug-free outdoors, Squire and I headed up the central hill to see if I could get a good picture of the white caps on the lake. We gave up when the wind wouldn’t allow me to hold the camera steady enough to get a non-blurtastic picture.
Posted by he and she at 10:20 PM No comments:

Back by Popular Demand

(And a bit of friendly nagging,) we’re going to recommit to the blog.

We’ve settled into life up here, and things are less exotic and exciting then they were when we first arrived. We’ve realized though, that the blog is less about life in the North, and more about keeping those in the South up-to-date on *our* life in the North.

Next week marks our one year anniversary of being in the North. Having experienced a whole year, we’ve definitely learned a couple of things.

1. Winter just may be better than summer for being outdoors. We are finding that the cold and snow was much easier to deal with than the huge swarms of huge mosquitoes. And apparently we have black fly season still to look forward to.

3. Don’t hold your breath waiting for the barge. As we experienced waiting for the last barge to come in last year, the first barge of the season is already late too. At least at this time of the year we don’t have to worry about things freezing.

We miss our friends and family in the South, and the convenience and independence of life down there. But we’ve made new friends up here (Poker Night is becoming a weekly tradition), and we’re starting to look forward to what life will be like for us when we do return to the south in a couple years.
Posted by he and she at 2:56 PM 2 comments: